The Catcher in the Rye Author Dies at 91

It wouldn't be a mistake to say that America and the whole world lost one of the most exclusive writers, the one who could penetrate the soul of teenagers and let their emotional and psychological anguish to be perceived and valued by grown-ups and age-mades. 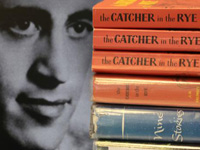 The Catcher in the Rye Author Dies at 91

J.D. Salinger, 91, author of the 1951 masterpiece The Catcher in the Rye, died Wednesday of natural causes at his home in Cornish, N.H., the author's son, Matt Salinger, said in a statement from the author's literary representative, Harold Ober Associates.

Catcher in the Rye was the only Salinger novel released in his lifetime, but it is an acknowledged masterpiece and established the author as one of the most influential writers of the 20th century.

The Catcher in the Rye was the first to capture the post-World War II alienation of youth: the idiomatic slang, the rage against the hypocrisy of the adult world and the fury at the inevitable loss of innocence that growing up demands.

Although the book was published in the early 1950s, its themes foreshadowed the youthful rebellion of the 1960s. There are more than 60 million copies of the 214-page novel in print worldwide.

Jerome David Salinger, born to a Jewish father and Irish mother on Jan. 1, 1919, grew up in New York City. He attended boarding school and later New York University and Columbia.

The future writer served in World War II as a soldier. His daughter, Margaret Salinger, writing in Dream Catcher, a memoir about her painful childhood and difficult relationship with her famous father, theorized that he may have been traumatized by the war.

By the time Margaret was born in 1956, Salinger had begun to retreat from the firestorm of attention, praise, criticism and expectations The Catcher in the Rye generated.

In the early 1960s, he published three collections of stories: Nine Stories, plus Franny and Zooey and Raise High the Roof Beam, Carpenters and Seymour: An Introduction.

He stopped publishing in 1965.

Salinger lived in rural New Hampshire for many decades, never granting interviews. But he had been known to read The New York Times Sunday Magazine.

In 1973, the then-53-year-old author wrote a letter to 18-year-old Joyce Maynard after she published a cover story in the magazine in 1973. A photo of the waif-like Maynard accompanied the piece. Her writing "aroused affection" in him, he wrote.

Salinger invited the Yale freshman to visit him. Maynard went, dropped out of college and spent a year with Salinger. But the affair ended badly, and Maynard wrote about it 25 years later in her memoir, At Home In the World.

Salinger also launched a successful legal challenge to a biography by Ian Hamilton, scheduled for publication in 1986. The book had to be reworked extensively after the courts ruled that it could not include direct quotes from Salinger's letters.

Between his daughter's memoir, Maynard's book and his own legal attack on a respected biographer, Salinger's image as an exemplar of literary and intellectual rigor took some serious hits.

Nonetheless, Salinger's writing remains brilliant and admired and, most significantly, continues to speak to anguished adolescents throughout the world.