Brad-Angie: Separation is Just a Matter of Time

Brad Pitt and Angelina Jolie may not be splitting yet, but according to general opinion their relationship might not last much longer. 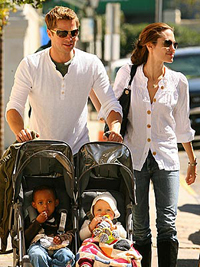 Brad-Angie: Separation is Just a Matter of Time

She's "exhausted and has been overwhelmed" with the kids, adds another. "She has nannies, but she wants to do it herself. Her kids are all in different stages now, running around, needing attention."

Jolie -- whom one source describes as a "type A" who "runs the household" -- is demanding on Pitt, 46, even down to the last detail.

"She'll yell at him when he makes the eggs too runny or burns something," says a source, who points out how Pitt prides himself as "a Mr. Mom who loves to cook."

Their quarrels have gotten so bad recently, one source notes, Pitt took to "calling her a bitch behind her back."