Anne Hathaway to Be Among Those to Ladle Out Oscars

Anne Hathaway deserved high honour. She will be among the first to learn who's up for an Oscar this year. 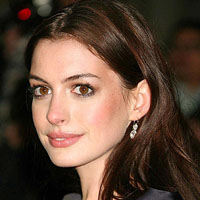 Anne Hathaway to Be Among Those to Ladle Out Oscars

Sherak and Hathaway will reveal nominations in 10 of the 24 categories at an early-morning news conference at the academy's Beverly Hills headquarters.

Hathaway was nominated for an Oscar last year for her leading role in "Rachel Getting Married."

Her other credits include "The Devil Wears Prada", "Bride Wars" and "The Princess Diaries."

Hathaway's acting style has been compared to Judy Garland and Audrey Hepburn and she cites Hepburn as one of her favorite actresses and Streep as an icon.

People magazine named her one of its breakthrough stars of 2001 and she first appeared on its list of the world's 50 Most Beautiful People in 2006.