A woman taking an adult education class at the Metropolitan Museum of Art accidentally lost her balance and fell into "The Actor," right, a rare Rose Period Picasso, tearing the canvas about six inches along its lower right-hand corner. 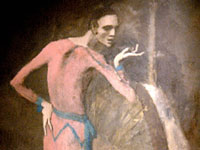 Immediately after the accident the painting was taken to the Met’s conservation studio so experts could assess the damage, museum officials said.

A statement released by the Met on Sunday afternoon said, "The damage did not occur in the focal point of the composition and the curatorial and conservation staffs fully expect that the repair — which will take place in the coming weeks — will be unobtrusive," New York Times reports.

The incident resulted in a six-inch "irregular vertical tear" on the lower right-hand corner of the 1904-05 painting, The Actor, which was taken to the museum's conservation studio for emergency treatment, according to a museum statement.

The Met has not released further details about hapless woman's identity or the circumstances of her fall, though it says conservators "fully expect" to repair the painting — a moodily atmospheric portrait of a thin, costumed man that is estimated to be worth more than $130 million — in time to include it in the highly anticipated "Picasso in the Metropolitan Museum of Art " opening April 27, ARTINFO reports.