Taking on his first lead role since 2002's "Signs," Mel Gibson returns to form in "Edge of Darkness" as an agonized homicide detective determined to avenge the murder of his only daughter, uncovering corporate corruption and political conspiracy in the process. 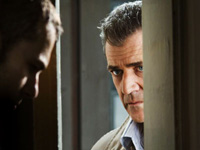 If the subject matter seems familiar, it's likely because director Martin Campbell has returned to the scene of his highly regarded 1985 British miniseries of the same name, to largely explosive effect.

Whether the performance will deliver Gibson box office redemption in the wake of his well-known personal issues will have more to do with audience response to the violent film's dark subject matter. The Warner Bros. release opens Friday.

Relocating from the original Yorkshire to Boston, the film's focus remains essentially the same, centering on Gibson's Thomas Craven, a career cop whose adult daughter, Emma (Bojana Novakovic), is gunned down on the front steps of his home. Driven by grief and guilt, believing that he was the intended target, Craven stops at nothing to track down her killer, but along the way he uncovers disturbing truths about her job at a top security-research compound with shadowy ties to the government.

Condensing a six-hour TV serial and turning it into a contemporary two-hour feature can be a tricky bit of business. Screenwriters William Monahan ("The Departed") and Andrew Bovell ("Lantana") come close to pulling it off.

Although it has retained much of its grit and intrigue, bringing the original Troy Kennedy Martin script up to speed from its original mid-'80s nuclear-arms race context is another matter. Their attempts to update the political agenda result in a scenario that comes off a tad far-fetched where its villains are concerned.

But in between the two "Edge of Darkness" assignments, director Campbell did a couple of Bond pictures -- most notably "Casino Royale" -- and that raw, sinewy energy comes very much into play here.