The Hollywood actors Brad Pitt and Angelina Jolie have signed papers paving the way for a legal separation with joint custody of their six children, it was reported last night. 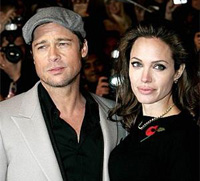 The couple, known as Brangelina, have been together since shooting the thriller Mr and Mrs Smith five years ago. They are said to have agreed that the children will live with Jolie.

The couple are not married; they said they would marry only when American homosexuals were also able to wed. Even so, documents were filed with a Los Angeles lawyer earlier this month to help with a smooth separation. Pitt and Jolie will keep all the money they have earned, which Forbes estimates at more than $100m (£62m) each.

Pitt, 46, will have full access to their three biological children, Shiloh and the twins Knox and Vivienne, as well as three adopted children, Maddox, from Cambodia, Zahara, from Ethiopia, and Pax, from Vietnam. All have the surname Jolie-Pitt.

Yesterday associates of both actors declined to comment, one saying it was a “private matter”.

The lawyers, based in Beverly Hills, have cleared the path for an announcement that has been the subject of rumours for many months.

Last week National Enquirer magazine carried a story that Pitt and Jolie had a final explosive row at a New York restaurant called the Alto on January 6.

It claimed that Pitt staged the six-hour dinner as an intervention to persuade Jolie, 34, to get psychiatric help. It alleged that she had suffered depression since the death of her mother from ovarian cancer three years ago, since when Jolie’s weight has dropped dramatically. It also claimed she had made a suicide attempt.

The magazine said that after that stormy night, the couple agreed their relationship was over and “their focus is now on making a smooth transition for their children”.

Pitt and Jennifer Aniston, 40, his former wife, were seen backstage together at the Haiti telethon in Los Angeles on Friday while Jolie was in New York promoting her next film, Salt.

Times Online has contributed to the report.