The Spears Donate to Haiti via Court

Britney Spears and her father Jamie Spears appeared in an L.A. court on Friday; many speculated that a judge might end Jamie's two-year legal conservatorship of his daughter. 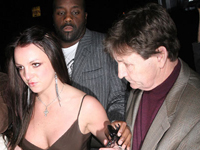 The Spears Donate to Haiti via Court

The day's actual agenda: a used dress.  The pop star's father had requested permission to handle the donation of a dress worn by Britney, 28, at the 2008 MTV awards -- to be sold to raise money for Haiti relief. Commissioner Reva Goetz approved the request. The court official also approved the disposal of "items that are longer useful to Ms. Spears or her estate."

"She is perfectly satisfied with her daddy dealing with this property," said Sam Ingham, Britney's attorney.  "She was very enthusiastic with the donation to Haiti relief."

The lawyer added: "We are looking forward to making progress with the conservatorship."

In January 2008, a court placed Spears under conservatorship of her father and an attorney, giving them complete control of her assets and other affairs.  At the time, Spears' mental health had deteriorated alarmingly; she made erratic public appearances and fought bitterly with ex Kevin Federline over their two sons Sean and Jayden, now 5 and 4 respectively. Following a tense standoff with cops in Spears' home earlier in January, doctors put her under involuntary psychiatric hold twice, and she eventually lost custody of her sons.

Since then, under her father's conservatorship, Spears has had an inspiring comeback with a smash album (Circus) and accompanying world tour and a seemingly happy, drama-free life that includes the calming influence of new boyfriend Jason Trawick.

US Magazine has contributed to the report.