Michael Jackson's Father Won't Get a Penny from the Singer's Estate 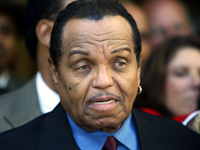 Michael Jackson's Father Won't Get a Penny from the Singer's Estate

Michael Jackson's estate does not want to give Joe Jackson, the late singer's father, a monthly allowance, because it would take money away from the singer's young children.

Attorneys for estate administrators John Branca and John McClain filed papers yesterday opposing Joe Jackson's efforts to get more than $15,000 a month from his son's estate. The filing states that Joe Jackson has failed to show that Michael supported him while he was alive. And Michael Jackson did not want his dad to be a beneficiary under the will.