Critics are not being nice while commenting on the new movie "Legion",  released these days. 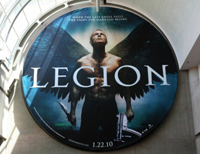 Talk about playing both sides of the fence. In "Creation," Paul Bettany's Darwin defies the God-fearing masses by making a case for evolution. And in "Legion," Bettany embodies one of God's most loyal soldiers, the archangel Michael. Now, he's more than welcome to work out his theological issues in public. But it would have been nice if he had chosen this path with some thought for us.

Instead, Bettany fans are stuck choosing between a staid arthouse drama and a cheesy apocalyptic thriller that wasn't even good enough to screen for critics in advance.

According to "Legion," God has had enough, and is ready to destroy the lot of us. Having already gone the flood route, He's chosen to smite the earth with B-movie cliches, like a storm of flies, an evil granny, and a demon-driven ice-cream truck. As End of Days disasters go, these hardly seem up to the challenge. But they are pretty scary to the folks in the desert diner chosen as Armageddon HQ.

The reason things are kicking off in dusty Paradise Falls is because a local waitress (Adrianne Palicki) is pregnant. Her unborn baby is humanity's last hope, though no one ever feels the need to wonder how or why. Then again, perhaps when an angel shows up, you aren't supposed to ask questions. Bettany's Michael is meant to annihilate humanity, but he's got a sentimental streak. So instead, he decides to help the staff (Dennis Quaid, Lucas Black, Charles S. Dutton) and customers (including Tyrese Gibson and Kate Walsh) survive.

It's hard to say why God's avenging army can't take down this handful of stragglers in one move, but Michael does arrive armed to the teeth. So they all sit inside shooting at slow-moving zombies, chatting about life, and  occasionally entertaining visitors like the angel Gabriel (Kevin Durand), who's annoyed that Michael disobeyed The Boss.

There are a couple of decent action scenes, and Bettany approaches the slapped-together script with impressive seriousness. But even if you overlook the lousy lighting, awkward editing, and uneven acting, there's so much talking -- and so little story -- that your mind is likely to wander.

New York Daily News has contributed to  the report.