All Stars to Participate in Beneficiary Event for Haiti

Beyonce and Madonna have been added as performers to Friday's multi-network "Hope for Haiti Now" telethon, and Denzel Washington, Brad Pitt, Leonardo DiCaprio and former president Bill Clinton are among the participants. 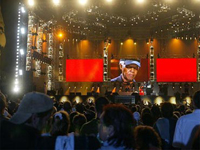 All Stars to Participate in Beneficiary Event for Haiti

People can start donating even before the start of the 8 p.m. EST concert via phone and text.

The two-hour telethon will be shown on all the major networks and a host of other channels. It will be broadcast from New York, London, Los Angeles and Haiti.