Michael Jackson to Sing at the 52nd Annual Grammy Awards 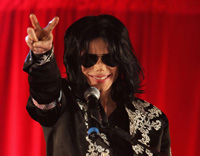 Michael Jackson to Sing at the 52nd Annual Grammy Awards

The audience of the 52nd Annual Grammy Awards on Sun. Jan. 31 will remember the show for a long time as they will be treated with a never-before-seen 3-D mini-movie for Michael Jackson's Earth Song.

It was created by Jackson as the centerpiece of his This Is It tour, but was never seen. The song has a strong theme about the future of the planet, and Jackson saw it as a unique opportunity to deliver a message to millions of people who would have seen him on tour, organizers say.

Celine Dion, Jennifer Hudson, Smokey Robinson, Carrie Underwood, and Usher will sing - along with the voice of Jackson -  in a tribute to the star.
USA Today has contributed to the report.