The Golden Globe brought no real surprises for "Avatar". The film  proved to be out of this world at last night's awards ceremony -- copping top honors for both best movie and director. 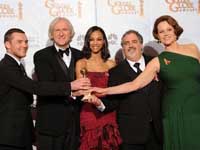 "Make no mistake, I am very grateful," the silver-maned director said, in stark contrast to the way he flamboyantly crowed, "I'm king of the world!" when his "Titanic" won at the Oscars more than 10 years ago.

The 55-year-old filmmaker  thanked his creative team for developing the blockbuster movie, revolutionary for its computer-generated wizardry.

The 3-D fantasy flick has now raked in $1.6 billion worldwide to become No. 2 only to "Titanic' as the biggest money-maker of all time. It was No. 1 at the North American box office this past weekend for the fifth straight week.

The wins were extra-sweet for the movie, after it let go the only other two awards it had been up for: best song and best musical score.

They also appear to pave the way for top Oscar gold, since the Globes -- handed out by the Hollywood Foreign Press Association -- are considered the best prognosticators of who will win those even more coveted statuettes on March 7.

The movie was up against such heavy-hitting contenders as the critically acclaimed, George Clooney-driven "Up in the Air" and emotional favorite "Precious," about an overweight, horribly abused teenage girl.

Clooney,48, also suffered a personal blow when he lost out as best dramatic actor to Hollywood veteran Jeff Bridges of "Crazy Hearts."

Sandra Bullock landed the coveted Best Actress in a Movie Drama for her moving role in "The Blind Side." She beat out contenders such as Helen Mirren of "The Last Station" and emotional favorite Gabourey Sidibe of "Precious."

But "Precious" didn't leave empty-handed -- Mo'nique won best supporting actress for her role as the abusive welfare mom in the flick. Her award was little surprise, given the highly acclaimed work. She beat out more entrenched Hollywood types such as Penelope Cruz of "Nine" and Vera Farmiga of "Up in the Air.

In the comedy category, "The Hangover" won top honors as best movie.

Perennial awards favorite Meryl Streep had a near-teary-eyed moment when she won Best Actress in a Musical or Comedy, for her charming role as Julia Child in "Julie and Julia."

Calling herself a "vessel for other women's stories and other women's lives," she gave viewers a rare glimpse into her personal life by revealing that she channeled her "personal and not so famous hero" -- her mother.

Host Ricky Gervais was stellar as the show's wise-cracking host, swilling a beer at one point and joking that it didn't matter because he wouldn't be asked back next year anyway.