Chan's "Spy" Leaves Much to be Desired

The stunts are a mild highlight in Jackie Chan's ultra-predictable family comedy The Spy Next Door. But Chan's traditional gag reel that rolls with the final credits offers the most entertainment. 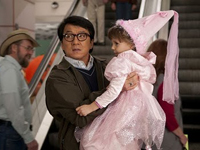 Chan's "Spy" Leaves Much to be Desired

Add a few more outtakes, and you have a better movie than the silly one that came before. Chan's linguistic goofs prompt a frustrated "I hate English!" making for the biggest laugh in a movie that feels like a lackluster hybrid of The Pacifier, Kindergarten Cop, Daddy Day Care and Agent Cody Banks.

Chan's charm is evident, particularly with his youthful co-stars, and he tries gamely to maintain a playful spirit. But the story is a succession of familiar, unimaginative scenes strung into a misfire of a movie.

He plays Bob Ho, a CIA superspy posing as a pen salesman. Ready to give up the espionage game, he takes up residence in a quiet suburb and falls for his divorced neighbor, Gillian (Amber Valletta). She's drawn to him for his dependability, the same trait that makes her kids think he's a bore. Of course, he's determined to win them over.

"I've brought down dictators," he tells his colleagues (Billy Ray Cyrus and George Lopez). "How tough can three kids be?"

Perhaps not as tough as winning over an audience.

Bob is asked to do one last job, a vague mission that involves Russian terrorists who sound like Boris and Natasha gaining control of the world's oil supply. But when Gillian has to suddenly leave town, Bob offers to babysit. Gillian's tech-savvy pre-pubescent son, Ian (Will Shadley), accidentally downloads a secret file from Bob's computer. Suddenly the Russians are coming. And they're so bad, they take candy away from small children.

Bob is forced to juggle the roles of superspy and wannabe super-stepdad.

But even Bob's arsenal of gadgets is only marginally interesting. More impressive are his agile jumping and climbing and the lightning-fast reflexes needed to fight off bad guys. But the 55-year-old Chan's still-noteworthy talents in fight sequences are sluggishly choreographed.

Chan has more chemistry with the kids than with Valletta, but the story is so insipid that it's likely to only sadden fans of the martial-arts icon and offer little enjoyment to its young audience.