Katy Perry is not Pregnant

Hardy two weeks passed after getting engaged to comedian Russell Brand when rumors has it that the 25-year-old Katy Perry  is pregnant. The singer hurried to deny the rumor on her Twitter page. 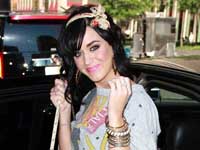 Katy Perry is not Pregnant

The couple reportedly became engaged during a romantic getaway. Brand, 34, presented Perry with a Cartier ring during their holiday trip to London. "Russell knows Katy's the one for him," an unnamed source  said. "He's never been into a girl like he has with her and they're besotted. He asked her to marry him last week and she quickly said yes."

Although Perry accepted the proposal, she reportedly declined the ring, asking her future husband for something different. "Russell is searching for a jewelry designer to make up a ring in time for New Year after the pair discussed what they wanted to have," the source said.

Earlier this month, Brand said he was eager to tie the knot and have kids. "[Marriage] would be good," he said. "I do want to have children."
Parade Magazine has contributed to the report.