Avatar Has Its Side Effect

Surely the director and script-writer of "Avatar" never planned to upset the audience. And still, there are things that prompt sad thoughts. 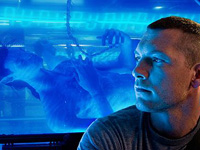 Avatar Has Its Side Effect

Fans of "Avatar" have targeted both the sheer beauty of the movie and the exotic nature of Pandora, but the general outlook on the human race (and on corporations) in "Avatar" seem to have resonated as well. One user on the forum wrote, "When I woke up this morning after watching 'Avatar' for the first time yesterday, the world seemed gray. It just seems so meaningless. I still don't really see any reason to keep doing things at all. I live in a dying world."

While the harmony that exists between the Na'vi and the other wacky beasts living on Pandora is beautiful and idyllic, it should also be noted that a handful of those beasties tried to stomp members of the Na'vi  before the planet turns on the Marines at the end of the movie. Also, it's possible these people were depressed even before they fell into "Avatar"-related melancholia.

"Avatar" has made a total of $1.34 billion worldwide. With that gigantic number of people seeing it, obviously somebody was going to get depressed.

MTV.com. has contributed to the report.