Charlie Sheen, one of America's highest-paid television actors, was arrested on Christmas Day. 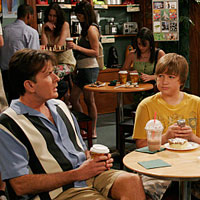 Sheen, 44, whose real name is Carlos Irwin Estevez, has known scandal before and has worked each of his arrests, divorces and indiscretions into the canon of bad-boy lore that has made him essentially scandal-proof.

"Charlie Sheen has bounced back from various scandals, and I don't think anyone expects anything more from him," said public relations expert Vanessa J. Horwell, founder and Chief Visibility Officer of ThinkInk PR. "Bad-boy behavior is part of his persona that's been a work in progress since the 1980s. He has bounced back time and time again."

The latest scandal to rock Sheen's world is his December 25 arrest in Aspen, Colorado, on second-degree assault and menacing charges, both felonies, and criminal mischief, a misdemeanor. Sheen has been married to sometime actress and real estate investor Brooke Mueller Sheen, 32, his third wife, since May 2008. The couple have twin sons who were born in March. They were reportedly having an argument when he was arrested, CNN reports.

When questioned by police, Sheen said that he and Mueller had argued because he told her about a song he shared with daughter from his marriage to Denise Richards, and Mueller got jealous and threatened to divorce him and take away the two children they have together, (Sheen has some first-hand experience with custody battles.) He denied trying to strangle Mueller or threatening her with the knife, which the report describes as having a four-inch blade. Sheen produced the knife for police: It was locked in the open position outside the bedroom where the alleged assault occurred.

Sheen was charged with assault, menacing, criminal mischief (he admitted to breaking two pairs of her glasses) and domestic violence. He posted $8,500 bond and was released Saturday, The Star-Ledger - NJ.com reports.

On the tape, a distraught Mueller, her speech sounding slurred, told a police dispatcher that Sheen threatened her with a knife before family members intervened.

"Right now we have people who are separating us, but I have to file the report," she is heard saying. Asked what kind of knife Sheen had, she said, "It's like some switch blade ... he has it in his back pocket." Sheen is not heard on the tape, ABC News reports.