When the holidays end and its time to take out the trash, Christmas trees can be one of the most difficult disposal problems people can have. 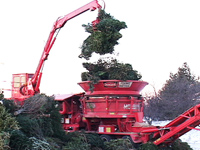 How a tree can be disposed of often depends on where a person lives.

Oklahoma City residents can dispose of their trees during their designated monthly bulk-waste day, which is printed on the utility bill or can be found at okc.gov, utilities spokeswoman Debbie Ragan said. Trees will not be picked up during weekly waste collection in the city. But Ragan said there is an alternative to throwing out the tree.

"Citizens can consider recycling their live tree instead of sending it to the landfill,” Ragan said.

That can include reusing pine needles as mulch, branches as compost and chopping the tree for mulch.

Several cities in the metro area have their own policies for dealing with trees. Some cities recycle while others ask residents to cut large trees in half before putting them out to the curb.

Edmond residents can drop trees off at Hafer Park or Mitch Park for recycling, city spokeswoman Ashleigh Grove said. Those trees will be chopped and turned to free mulch, which residents can pick up at Mitch Park after Feb. 12.

"We just ask for all of the tree stands and nails and ornaments be removed from them,” Grove said.

Grove said people who can’t drop off their trees can schedule a special collection by calling 359-4701 between now and Jan. 3.

Midwest City and Norman also recycle Christmas trees. In Midwest City, trees can be taken to the recycling center, 8730 SE 15, where they will dry out and be mulched, a city spokeswoman said. Trees will not be picked up curbside this year.

Yard crews will pick up live trees in Norman, Utilities Director Ken Komiske said. Trees should be cut in half if they’re longer than 6 feet.

"We take it to our compost facility and then we mulch it up first and compost it later,” Komiske said.

Trees in Warr Acres need to be cut in 4-foot bundles and under 50 pounds to be picked up. Trees in Moore should be cut in 3-foot lengths and placed on the curb on regular trash days.

Trees in The Village and Nichols Hills can be placed on the curb and picked up as-is on regular trash days, city spokesmen said.

The NewsOK has contributed to the report.