Tracie Steger lost hope after search parties and fliers failed to turn up her beloved cat named Giggle-Blizzard. However, after 11 days and two broken legs, the Florida cat has arrived home just in time for Christmas. 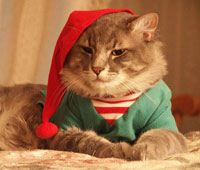 It was Thanksgiving evening when Steger heard a yelp from the porch. When she went to check it out, she found her beloved pet. A car had smashed his back legs a week earlier, but Giggle-Blizzard somehow survived and returned home.

He apparently had known the area from walking unleashed with Steger's seven other cats and two dogs, HappyNews.com reports.

Giggle-Blizzard had two severe fractures. He has had two surgeries to set the bones and now wears two green casts. Veterinarian Mike Kern of the Animal Care Center of Weeki Wachee describes the injuries as serious but isn't surprised Giggle-Blizzard made it home.

"They do very, very amazing things," he said.

Kern expects the cast will be removed from Giggle-Blizzard's left leg within two weeks. The right leg will take a little longer to heal, but within a few months, the cat should be completely healed.

She posted a message on Craigslist to others who have missing pets. "I just had it in my heart to post on Craigslist that if you've lost your pet, don't give up, because we didn't," she said, Tampa Tribune reports.