Santa Can Be Tracked through Google Earth

U.S. air defense forces are keeping tabs on Santa Claus as they have every Christmas Eve for more than 50 years. 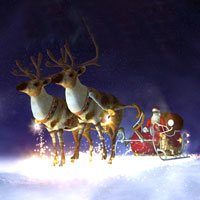 Santa Can Be Tracked through Google Earth

The tradition began in 1955 after a Colorado Springs department store printed the wrong phone number in an ad telling kids how to reach Santa.

Instead of dialing St. Nick, callers were put through to the Colorado-based Continental Air Defense Command operations "hotline."

Rather than slam down the phone, the director of operations at the time, Col. Harry Shoup, had his staff check the radar for Santa's movements and provide callers with updates on his location, USA Today reports.

It was also reported, Santa began his annual journey at 2 a.m. ET on Thursday, and Google and NORAD have developed many different ways to keep tabs on the jolly old elf this season. One of the best ways to do so is through the Google Earth Web browser plug-in available for Windows and Mac OS X users.

Once you've installed the plug-in, go to noradsanta.org to track Santa's progress using Google Earth in Google Maps. You can follow Santa's trail of presents, called his "Sparkles Trail," to see where Saint Nick has been. Clicking on any of the present icons will give you a user-generated image in a pop-up window courtesy of Google's Panoramio. From the window, you can take a look at more Panoramio images from that stop on Santa's tour, follow a link to learn more about that location on Wikipedia, or zoom in on Google Maps to take a closer look, PC World reports.

News agencies also report, this year the by-now-traditional NORAD tracking of Santa's whereabouts has been subcontracted, apparently, to Google Earth, where you can track Mr. Claus, his reindeer and elves in 3-D!

The story of how the whole "NORAD tracks Santa" thing came about is actually pretty interesting: It was all a mistake.

In 1956, a Colorado Springs-based Sears store ran an advertisement encouraging people to call Santa Claus on a special kind of telephone hotline. Due to a printing error, the phone number that was printed for the hotline was actually for Continental Air Defense Command (CONAD). Then-Colonel Harry Shoup received the first call on Christmas Eve of 1955, from a six-year old boy who began reciting his Christmas list. Shoup didn't find the call funny, but after asking the mother of the second caller what was happening, then realizing the mistake that had occurred, he told his staff to give Santa's position to any child who called in, The Los Angeles Times reports.