Sarandon and Robbins No Longer Together

After more than two decades together, Susan Sarandon and Tim Robbins have split, according to multiple reports. 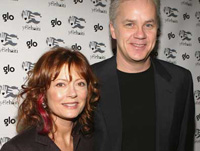 Sarandon and Robbins No Longer Together

"Actress Susan Sarandon and her partner of 23 years, actor Tim Robbins have announced that they separated over the summer," her rep Teal Cannaday tells reporters. "No further comments will be made."

The two -- both known for sharing liberal political views -- met on the set of the 1988 baseball comedy Bull Durham.

They have two sons: Jack Henry, 20, and Miles Guthrie, 17. (Sarandon has a daughter Eva Amurri, 24, from a previous relationship with Italian director Franco Amurri.)

At recent events, Sarandon, 63, declined to answer questions about Robbins, 51.

In 2004, she confessed to the Times of London, "He is a good guy, and he is also 12 years younger than me. I won't marry because I am too afraid of taking him for granted or him taking me for granted — maybe it will be a good excuse for a party when I am 80. Our children and property bind us, but so does the battle. We fight strongly but fairly. I can’t say that it is always comfortable, but he is my really good friend."

UsMagazine.com has contributed to the report.