Heroines of "Sex and The City -2" Seem Viable as Ever

The trailer for the "Sex and the City 2" movie is intriguing and that will surely make it one of the much-anticipated films of  the year 2010. 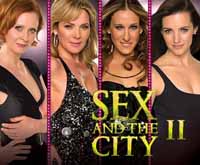 Heroines of "Sex and The City -2" Seem Viable as Ever

The film, set for a summer release, takes place two years after the first film, and the trailer shows the famous foursome (Carrie, Samantha, Miranda and Charlotte) sitting at lunch, walking down a runway, smiling at a wedding and, curiously, riding on camels in the desert.

"Sometimes, you just have to get away with the girls," Carrie cheekily explains via voiceover.

In response to rumors that the "Sex and the City" gals don't get along, Parker told Star magazine, "'It's ridiculous, I love the cast and spending time with them – it was peculiar to me to see the scrutiny the four of us have come under."