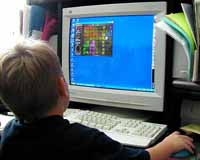 Police say a frustrated Boston woman called 911 to say she couldn't get her 14-year-old son to stop playing video games and go to sleep.

Police spokesman Officer Joe Zanoli said Monday the helpless mother called for help around 2:30 a.m. Saturday to say that the teenager also walked around the house and turned on all the lights.

Two officers who responded to the house persuaded the child to obey his mother.

Zanoli says the mother's 911 call over video game obsession "was a little unusual, but by no means is it surprising — especially in today's day and age when these kids play video games and computer games."