Britain's Prince William bedded down for the night in freezing temperatures under a London bridge to help the cause of a leading homeless charity of which he is a patron, the royal palace said on Tuesday. 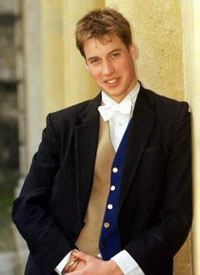 The prince, 27, put down his sleeping bag on cardboard boxes in an alleyway under Blackfriar's Bridge on December 15, a night when temperatures dropped to -4C, the charity Centrepoint said.

The prince, second-in-line to the throne, was accompanied by his private secretary, ex-soldier Jamie Lowther-Pinkerton, and Seyi Obakin, the charity's chief executive, News24 reports.

"I cannot, after one night, even begin to imagine what it must be like to sleep rough on London's streets night after night," Prince William was quoted by Sky News.

"Poverty, mental illness, drug and alcohol dependancy and family breakdown cause people to become and then stay homeless.

"Centrepoint's work — along with many other organizations' — in tackling these fundamental causes is desperately important if we are ever to end homelessness in this country," FOX News reports.

William, second in line to the throne, was exposed to some of the hardships found on London's streets when his mother, Princess Diana, took him to a shelter in 1996. Just 13 at the time, William spent an hour at the facility with his younger brother, Harry.

Diana was well-known for her charitable work and the homeless was a group she was particularly close to. She had also served as Centrepoint's patron, a position she held at the time of her death in 1997.

In a post to the charity's Web site, Obakin said the idea for William to spend a night on the streets — known as "sleeping rough" in Britain — was hatched in March.

"He was determined, as he has always been, to understand deeply the full range of problems a homeless young person might face," Obakin said. "For me, it was a scary experience. Out of my comfortable bed. Out there in the elements. Out there on an extremely cold night, with temperatures down to -4 C (39 F). And it was the same for Prince William. But he was determined to do it."

Obakin said they found a secluded spot — tucked away behind some garbage bins — and settled in for a restless night.

"But there was no shielding from the bitter cold, or the hard concrete floor, or the fear of being accosted by drug dealers, pimps or those out to give homeless people a 'good' kicking," Obakin said.

William is currently training to be a Royal Air Force search-and-rescue pilot, The Associated Press reports.