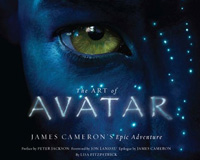 Storms in the East likely will hurt the movie's prospects to approach the December opening weekend record of $77.2 million set by Will Smith's "I Am Legend."

"Avatar" did almost as much business Friday as Cameron's last narrative film, 1997's "Titanic," over its entire opening weekend. "Titanic" had a $28.6 million debut weekend, but remained afloat for months at the top of the box office as it took in a record $600 million domestically.

Set in the 22nd century, "Avatar" stars Sam Worthington and Zoe Saldana in a story of a human-alien conflict on a distant moon.