The creator of Fox's "American Idol" has devised a new show which would not occupy TV screen time as it is going  to be broadcast via Internet. 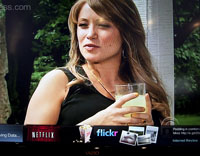 A new project will tell the story of five young people trying to make it in Hollywood.

Starting in early 2010, Simon Fuller's "If I Can Dream" will follow three aspiring actors, a model and a musician whose experiences will be streamed live. Viewers will have a chance to comment on what they see, and influence it, through blogs, MySpace, Twitter and Facebook.

The announcement Wednesday said the project is designed for the social networking set and will be "unfiltered and unvarnished."

"If I Can Dream" will launch across multiple platforms, including mobile handsets and radio. An edited episode will be available weekly on Hulu.com and distributed internationally. Hulu.com is a joint venture between NBC and Fox.