Iron Man 2 to Hit The Theatres in May 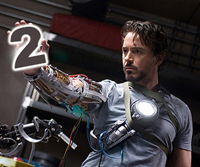 Iron Man 2 to Hit The Theatres in May

Judging from the trailer, Iron Man 2's storyline seems to be modelled thematically after Rocky III -- Tony Stark becomes Champion of the World, basks in the public's adulation, then gets a little too comfortable, a little too cocky, and is brought down by a tougher, hungrier adversary. In this case, Rourke plays the part of Clubber Lang, with Cheadle as Apollo Creed and Gwyneth Paltrow as Adrian.

The New York Post  has contributed to the report.