An American idol Jennifer Jones, the beautiful, raven-haired actress who was nominated for Academy Awards five times, winning in 1943 for her portrayal of a saintly nun in "The Song of Bernadette," died Thursday. She was 90. 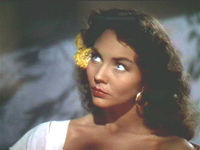 Jones, who in later years was a leader of the Norton Simon Museum, died at her home in Malibu of natural causes, museum spokeswoman Leslie Denk told The Associated Press.

Known for her intense performances, Jones was one of Hollywood's biggest stars of the 1940s and '50s.

Among her most memorable roles were the vixen who vamps rowdy cowboy Gregory Peck in "Duel in the Sun," and the Eurasian doctor who falls for Korean War correspondent William Holden in "Love Is a Many-Splendored Thing."