So You Think You Can Dance Winner Named

The fall season's So You Think You Can Dance ended triumphantly, with Russell Ferguson, the charismatic krumper from Boston, beating the odds — as well as his well trained competitors — and winning the title of America’s Favorite Dancer, $250,000 in prize money, a spot on the cover of Dance Spirit magazine and (along with Kathryn McCormick, the female dancer with the most votes) a part in the 2010 Oscars telecast (care of judge Adam Shankman). 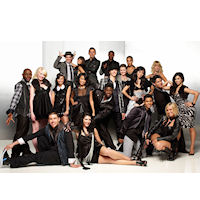 So You Think You Can Dance Winner Named

Meanwhile, this season So You Think You Can Dance overcame injuries, baseball, scheduling conflicts and the loss of one of its most revered choreographers, Mia Michaels.

“It feels crazy, a dream come true [and] everything into one,” an elated Ferguson told PEOPLE backstage after the results. “It feels like everything has just fell into place … everything is so perfect right now. I couldn’t ask for anything more.”

Despite his post-show bliss, Ferguson spent the majority of the broadcast masking pain and frustration onstage after he injured himself during a hip-hop routine with fellow contestants Jonathan “Legacy” Perez and Kevin Hunte, People Magazine reports.

It was also reported, for more on what the season favorite thinks about officially becoming America’s Favorite Dancer, the finale-night issues, and plans for the future, click on the jump.

Like anyone else even had a chance. Charm, talent, poise — Russell Ferguson had it all. That’s likely why the krumper bagged the $250,000 prize and title of America’s favorite dancer last night.

"I try to keep in a humble state of mind. There are times where I would think about winning, but I would stop thinking about that, because I felt like I would get too comfortable. And I wanted to stay on my toes the whole time until that actual moment," Russell Ferguson said, Entertainment Weekly reports.

Russell's coronation as America's next top Dance Spirit Magazine cover model marked the end of a very uneven season, as well as another strange results show. Wednesday night's fits and starts seemed to encapsulate the fits and starts of the whole season. There were the technical microphone difficulties. Then there was the parade of judges who came back to introduce their favorite dances — but that also seemed unusual, given that they were absent the entire voting season. And even the usually unflappable Cat appeared to be tongue-tied and out of sorts.

News agencies also report, despite the positive outcome and the obvious talent of the dancers, these little glitches seemed to compound the fact that season 6 has been somewhat of a mish-mashed letdown. A weird, autumnal stepchild of the summer show we love. The one who acts just a little bit peculiar and out of character when trotted around different circles. The one to which you just want to smack upside the head and yell ''snap out of it!'' And no amount of Cat's insistence that ''It really really really is a great season!'' could convince me otherwise, msnbc.com reports.