Elin Nordegren to Separate from Woods 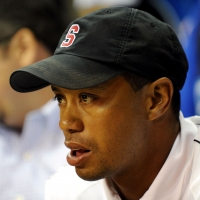 Elin Nordegren to Separate from Woods

According to ABC News , NBC News and People magazine, the former Swedish model will look to split from the 14-time major winner following his admission of infidelity and reports of affairs with at least 14 women.

“Divorce is 100 per cent on,” ABC News’s website reported a source saying. “She’s not rushing to divorce, however. She’s going to take her sweet time. She wants all the dirty laundry to be out on the table before she signs anything.”

NBC pegged the split to happen sooner rather than later though, Globe and Mail reports.

It was also reported, Elin Nordegren is taking the kids and traveling to her homeland for the holidays.

“Elin is going to Sweden soon,” the source says. “Two stewardesses and one pilot are in Sweden with the plane now getting it ready to come pick them up.”

The initial plan was for Nordegren, 29, and the family to travel to Sweden in January. But those plans changed. Woods is not expected to come along.

Nordegren’s mother, Barbo Holmber, has returned to Sweden after coming to her daughter’s side after the Thanksgiving morning crisis, and ending up in the hospital after complaining of stomach pain.

Sources caution that Nordegren’s holiday trip to Sweden, where she recently purchased a $2.3 million country retreat outside Stockholm, is not a permanent one as she plans to split her time between both countries, People Magazine reports.

Meanwhile, Woods was apparently licking his wounds on his yacht Privacy, docked in North Palm Beach. Old friend Charles Barkley says on All Due Respect, airing Sunday on news network HLN, that the golfer changed his cellphone number the day after his Nov. 27 car accident, and no one has heard from him since.

On a positive note, Woods was named athlete of the decade by the Associated Press, MiamiHerald.com reports.