The trailer for Tim Burton's Alice in Wonderland has hit the internet. Tim Burton has been at the head of such surreal productions as Edward Scissorhands, Charlie and the Chocolate Factory and Sweeney Todd. The two-minute clip shows the director really stretching outside his comfort zone. 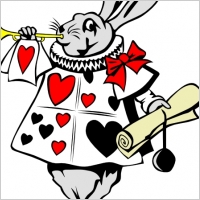 Burton’s version of the Lewis Carroll classic contains total non-Burton hallmarks as Johnny Depp in an eccentric role, Helena Bonham Carter as a villainess, surreal, hallucinatory visuals (which, to be fair, come straight from the Carroll book), a Danny Elfman score and a bizarre sense of campy humor. Oh where, oh where does he get his ideas?

Enough with the snark, and onto the synopsis. The Alice in Wonderland trailer begins with a few key images--an establishing shot of Wonderland itself, followed by introductory images of both The Red Queen, Tweedle Dee and Tweedle Dum and, best of all, the Cheshire cat--which flash across the screen as viewers hear the voiceover of the Mad Hatter (Johnny Depp) explaining the wonders of, um, Wonderland, College News reports.

It was also reported, Burton's flick is also called "Alice in Wonderland," but the story is set long after the events in the original story.

You actually get a bit of that exposition in this new trailer as well, so if you're unclear on how the story is set up you should definitely check it out. Also check it out if you're already a fan, as there's a lot of great stuff here: the Red Queen (Helena Bonham Carter) shouting her famous line, her playing card army on the march, Johnny Depp's Mad Hatter being... well... mad and plenty more. No caterpillar though. Bummer, MTV.com reports.

"There is a place like no place on earth," a disembodied voice intones as we see Tweedle Dee and Tweedle Dum picking their way through a colorful, otherworldly landscape.

"Some say to survive it, you need to be as mad as a hatter - which luckily, I am," the quavering voice continues as Johnny Depp's face, complete with orange hair and eyes almost as big as the aforementioned cat's, looms into view.

We then get our first glimpse of Mia Wasikowska as a tiny, delicate Alice, as a towering Depp as the Mad Hatter runs across a tea table in the forest to greet her.

Red Queen Helena Bonham Carter is instantly recognizable as the tyrannical Red Queen, despite her oddly-shaped head, an example of the movie's blend of CGI and live action, New York Daily News reports.