Kate Hudson and Yankee Alex Rodriguez have reportedly split, according to some reports. 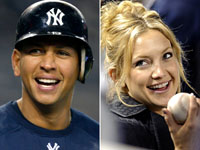 There’s no official confirmation coming from either Hudson or A-Rod, but this comes as little surprise, since they never confirmed they were dating in the first place. However, the couple was seen together in public frequently, and Hudson spent the better part of the summer at Rodriguez’s Yankees games at home and on the road.

The two appeared to have a spat the night the Yankees won the World Series: Hudson was seen leaving a celebration at New York nightclub 1OAK in a huff.

Last Thursday, Hudson appeared on “Late Show With David Letterman” and giggled her way through a series of questions about the baseball star. The couple appeared in good spirits together at Hudson’s premiere for her new film, “Nine,” on Dec. 4 in London.

The rumor has it Hudson and the Yankee player have tired of their relationship due to their similar fiery characters, that's why that romance could not last long, according to MSNBC.com report..