Those Longing to Get into the Hall of Fame

Congratulations are in order to the Stooges, Genesis and ABBA, who lead the latest batch of inductees in the Rock and Roll Hall of Fame. Along with the Hollies and Jimmy Cliff, they'll all be sworn into rock's most hallowed hall on March 15, 2010. 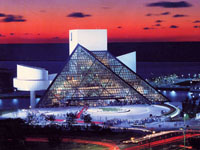 Those Longing to Get into the Hall of Fame

The criteria for induction requires that a band is not eligible until 25 years after the release of their first album. Below there are five groups who has made it big recently and who could be a part of the all-star jam in 2034.

Kings of Leon: A current favorite among pop lovers, alternative fans and classic rock aficionados, Kings of Leon have the right spirit and attitude to have a memorable career. The success of Only by the Night (and the huge single "Use Somebody") will likely be repeated several more times in the next two decades.

Taylor Swift: She's almost certainly going to be the best-selling artist of the coming decade, and she'll continue to bring the pop and country worlds even closer together, which means she'll end up being both a great musician and something of a revolutionary. That sounds exactly like Hall of Fame material.

The Black Keys: Their new album as BlakRoc keeps pushing the boundaries of their garage punk/no wave/gutter funk sound, and it seems like it's only a matter of time before the Black Keys establish themselves as mainstream players.

Muse: They're one of the few younger bands working today who play intricate music and construct complicated albums but can still get played on the radio and attract stadium-sized audiences. Their combination of commercial and critical success should serve them well over time.

Daughtry: The dude sells millions of albums and seems primed to have a real critical breakthrough sooner rather than later. Think of him as Bon Jovi: In the Slippery When Wet era, the idea of them as one of the greatest of all time would have sounded ludicrous.

MTV.com has contributed to the report.