Sarah Jessica Parker is juggling parenthood and career as she finishes filming the big-screen sequel to Sex in the City while taking care of her 6-month-old twin daughters and her 8-year-old son with Matthew Broderick. 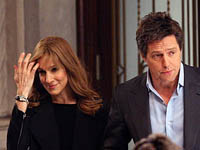 But, she found time to co-star with Hugh Grant in Did You Hear About the Morgans?, playing a couple whose marriage is falling apart until they get transplanted from New York to Wyoming in the witness protection program.

Parker could hardly believe she was finally sharing the screen with one of her favorite leading men.

"I think I remember auditioning to co-star with Hugh in Four Weddings and a Funeral. I think I did. I know I screen-tested for Nine Months. Of course, I didn't get either. I have wanted to play opposite him in a romantic comedy for basically as long as Americans, especially women, have known and loved Hugh Grant."
Parade Magazine has contributed to the report.