After nearly three years together, Reese Witherspoon and Jake Gyllenhaal called it quits in early December. "It broke his heart," an insider reveals in the new issue of Us Weekly. 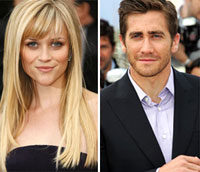 A source close to Gyllenhaal, 29, explains that the once-golden couple "fought constantly in the past few months," and that the relationship concluded over a series of phone calls.

Adds another source, "No one cheated. There was no drama," Us Magazine reports.

People.com reported the couple went their separate ways about two weeks ago, but their representatives denied the account at the time.

E! News Tuesday cited unnamed insiders as confirming the report is true, however. The program also noted on its Web site that Witherspoon and Gyllenhaal's publicists are now declining to comment on the story.

"They needed time to figure it out and they were on different coasts," a source told E! News. "When they were finally together, they talked it out and decided they're not going to be together anymore."

"There are no other people involved," another insider added. "The relationship just ended. It just fizzled. But they also wanted to be careful and private about it because of Reese's kids."

Witherspoon was previously married to actor Ryan Phillippe, the father of her two children, UPI.com informs.