Kourtney Kardashian has given birth to a healthy baby boy. 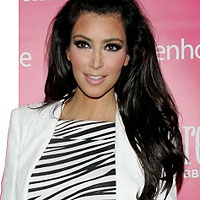 This is the first child for Kourtney and boyfriend Scott Disick, born yesterday morning at an L.A. hospital.

From all accounts, Mason Dash Disick was born healthy, tipping the scales at 7 pounds, 6 ounces,.

He was born just over a week before his expectant due date, and after his birth, his mom requested a tuna sandwich.

Big sister Kim is very excited about being an aunt, taking to her Twitter account saying: “I’m an auntie!!!! My little Mason Dash Disick is here!!! We are so happy!”

“I think Kourt’s going to be the most amazing mom,” she added, dBTechno reports.

Mason weighed in at 7 lbs., 6 oz., and measured 19.5 inches. This is the first child for Kourtney, 30, and her on-again boyfriend Scott Disick.

The two still managed to put in an appearance on E!'s Chelsea Lately show.

"We're really, really excited," Kris said, adding that she and Kim were in the same outfits they wore to the hospital, Us Magazine reports.

News agencies also report, on Tuesday morning at around 5:30 a.m., Disick crashed his 2009 Mercedes SL-65 convertible into a curb and shrub outside of a Los Angeles strip club. Disick, who had left the scene by the time police arrived, was hospitalized for minor injuries. Two passengers were not hurt. Later that day, Disick voluntarily checked into the Wonderland Drug and Alcohol Treatment Facility.

“Mason admitted himself to an intensive medical rehabilitation facility,” a publicist for the Kardashian family said in a statement Tuesday.

“Because this is a medical matter, it is our hope that the press will appreciate the seriousness of the situation and respect the privacy of Mason as well as the other patients receiving treatment at the facility.”

This is the second time this year that the 2-day-old has been in a treatment facility. In August, the then unnamed fetus checked itself into an outpatient rehab center in Malibu for an addiction to prescription painkillers, Celeb Jihad reports.