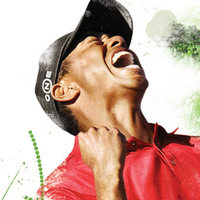 Woods posted the highest popularity rating in poll history -- 88 percent -- when Gallup first measured him in 2000. Gallup says the 52-point swing is the largest drop between consecutive measurements since 1992. The 55-point falloff from his high to low point matches that of President George W. Bush from 2001-2008, Chicago Tribune reports.

It was also reported, Tiger Woods is on the brink.

The shamed golfer is terrified that his wife is going to divorce him over his sexcapades and make his life miserable by moving to Sweden with their two young kids, a source close to Woods' camp told The Post yesterday.

"He's only just coping -- he's on the edge," the well-placed source said. "He sees everything coming crashing down around him. His career, his family."

Woods' wife, Elin Nordegren, is refusing to speak to him, the source said -- and the two are now definitely living apart.

The only thing that she said to her hubby was that he had better get into therapy -- or else, the source said.

And, as if his current family woes weren't already enough, the superstar athlete also is afraid that at least two more mistresses will surface, the source said, FOXNews reports.

In the meantime, Tiger Woods' busty former-lingerie-model mistress yesterday detailed the steamy hotel trysts she had with the golfer during his wife's first pregnancy -- and tearfully apologized for the sex romps.

"According to [Tiger], things were rough [with his wife], and they were going to separate. He said, 'We're on the outs,' but she was pregnant, and they had to get through that," Cori Rist, a 31-year-old single mom from Manhattan, told NBC's "Today" show.

"I realized the things he was telling me were false," the stunning blonde said. "He has a way to make you believe that he is a very honest and good man.

Cori Rist, on the "Today" show yesterday, says Woods lied to her about his marriage being on the rocks.