"Up In The Air " with George Clooney Tops Golden Globes

It was announced Tuesday morning , " Up In The Air " with George Clooney led the nominations at this year's Golden Globe Awards, with six nods. 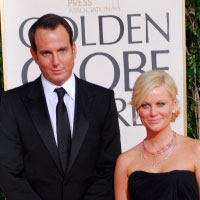 "Up In The Air " with George Clooney Tops Golden Globes

Among its nominations were those for best drama, best actor Clooney and best director Jason Reitman.

Meryl Streep will essentially compete against herself, as comedic best actress in both Julie and Julia and It's Complicated, while Sandra Bullock picked up nominations for leading dramatic role in The Blind Side and as comedic actress in The Proposal.

In the dramatic movie category, Up in the Air will be up against Avatar, The Hurt Locker, Inglourious Basterds and Precious: Based on the Novel Push by Sapphire, People Magazine reports.

It was also reported, j oining "Nine" in the category for best movie musical or comedy were cooking movie "Julie & Julia," box office sensation "The Hangover," relationship film "The Hangover" and Sundance hit "(500) Days of Summer."

The Golden Globes are given out in January by the Hollywood Foreign Press Association and are seen as a key indicator of which movies will compete for the world's top film honors, the Oscars, in March.

Among nominees for best actor in a film drama were Clooney, whose character in "Up in the Air" is forced to contemplate his own life, Jeff Bridges playing a down-and-out country singer in "Crazy Heart," Colin Firth as a man considering suicide in "A Single Man," Morgan Freeman playing Nelson Mandela in "Invictus" and Tobey Maguire for "Brothers."

Nominations for best actress in a drama went also to veteran Helen Mirren for "The Last Station," Emily Blunt in "The Young Victoria," Carey Mulligan with "An Education" and newcomer Gabourey Sidibe in "Precious: Based on the Novel Push By Sapphire," Reuters reports.

News agencies also report, Sir Paul is nominated for I Want To Come Home from the Robert De Niro comedy Everybody's Fine, while U2 have been shortlisted for Winter from the film Brothers.

I Will See You, sung by Leona Lewis - the theme song from Avatar - is also nominated.