The Iraq war drama "The Hurt Locker” was selected by The New York Film Critics Circle as the year's best film. 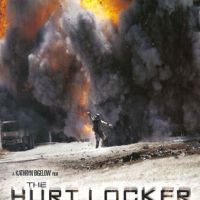 The critics named Meryl Streep as best actress for her performance in "Julie & Julia." It's her fourth award from the group. Best actor went to George Clooney for two performances: "Up in the Air" and "Fantastic Mr. Fox."

The New York Film Critics Circle, founded in 1935, will present its awards Jan. 11 at a ceremony in New York, The Associated Press reports.

It was also reported, there has to be a huge amount of champagne popping today at Summit Entertainment, which released "The Hurt Locker" way back in late June, figuring it would make for great adult-oriented counter programming in the heat of the summer, when the multiplexes are crowded with lunk-headed special-effects thrillers.

Summit bet that the movie had enough artistic firepower to be remembered at year's end. And they were right. The LA Film Critics Assoc. and the New York Film Critics Circle both gave "The Hurt Locker" their best picture award, with filmmaker Kathryn Bigelow earning the best director nod from both organizations as well. The two prestigious critics groups agreed on a couple of other fronts, with both organizations giving the best animated film award to "The Fantastic Mr. Fox" and a best supporting actor nod to Christoph Waltz from "Inglorious Basterds," The Los Angeles Times reports.

News agencies also report, the runner-up in the best film category was the comedy-drama “Up in the Air,” and Michael Haneke was the best director runner-up for “The White Ribbon.”

Jeff Bridges was named best actor for his performance as Bad Blake, a hard-living, washed-up country singer in “Crazy Heart.” Colin Firth was runner-up for “A Single Man.”

Yolande Moreau earned best actress honors in “Séraphine,” as Séraphine Louis, a devout housekeeper who was a self-taught painter. Carey Mulligan was runner-up for “An Education.”

Jason Reitman and Sheldon Turner won for their screenplay for “Up in the Air.” Runner-up was Jesse Armstrong, Simon Blackwell, Armando Iannucci and Tony Roche for “In the Loop," The Los Angeles Times reports.