The Tiger Woods saga took another headline-grabbing twist Friday, when the golfer announced he will take an "indefinite break" from his PGA Tour career as he scrambles to salvage his marriage. 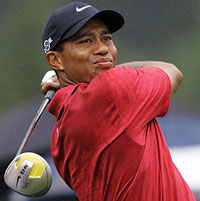 Woods disclosed his decision in a late-afternoon statement on his Web site. He used the word "infidelity" for the first time since he crashed his sport-utility vehicle into a tree and fire hydrant outside his Florida home on Nov. 27, launching a startling sequence of events for one of the world's most famous athletes.

The past two weeks brought an avalanche of scrutiny to Woods' personal life, most notably allegations of multiple extramarital affairs. He apologized for unspecified "transgressions" in a previous statement on his Web site, but Friday's posting marked his first direct acknowledgement of any affairs.

"It may not be possible to repair the damage I've done, but I want to do my best to try," Woods said. "After much soul searching, I have decided to take an indefinite break from professional golf. I need to focus my attention on being a better husband, father and person," San Francisco Chronicle reports.

John Daly has dealt with his own marital problems and personal issues over the years, so he reached out to Tiger Woods as the accusations of infidelity piled up.

"He just didn't want to talk to anybody," Daly said.

These are tumultuous times for the world's No. 1 player, who announced Friday he is taking an indefinite break to attempt to save his marriage following two embarrassing weeks filled with allegations of extramarital affairs.

Golf is about to be without its biggest superstar again.

"I'm in shock over it all, a lot of our players are in shock," Daly said at the Australian PGA on Saturday. "I'm not happy with the way some of our players have responded — that's their way of getting back because they know they can't beat him at golf, The Associated Press reports.

In response to Woods’s announcement, the PGA Tour issued its own statement.

"We fully support Tiger’s decision to step away from competitive golf to focus on his family," the Tour’s statement said. "His priorities are where they need to be, and we will continue to respect and honor his family’s request for privacy. We look forward to Tiger’s return to the PGA Tour when he determines the time is right for him," Boston Globe informs.