Friday Jamie Jungers, one of Tiger Woods' alleged gal pals, said the world's most recognizable athlete didn't try to keep their affair on the down low. 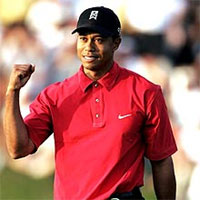 "To be honest with you, I'm not really sure \[why\]," Jungers, 26, told NBC's "The Today Show." "We went places together; people were taking our photographs in the nightclubs.

"When I went to see him at the MGM, I would have to check in under my name and say that I was there to see him, and Tiger would come down and get me."

Jungers said their highly public dalliance began in a Las Vegas nightclub in early 2005 after the already-married Woods beckoned the busty blond to his table.

After a night of heavy drinking, the pair spent the night together inside Woods' hotel room at the MGM Grand, New York Daily News reports.

It was also reported, while Jamie Jungers claimed to have spent the night at Casa Woods while wife Elin Nordegren was MIA, Jungers was adamant that she wasn't paid for services rendered or that she worked for—let alone knew—escort-service owner Michelle Braun.

"That's just a lie," says Braun. "Of course she's going to deny it. What girl is going to go on national TV and admit she was an escort?"

Meanwhile, rumors began flying about the world's No. 1 golfer’s extramarital affairs ever since he crashed his SUV in front of his Florida home the day after Thanksgiving. That late-nigh single crash reportedly occurred after a heated argument between Woods and his wife Elin Nordegren on the heels of the National Enquirer's big revelation the married golfer was romantically involved with NYC party girl Rachel Uchitel.

Since then, as many as twelve more women have stepped forward, publicly claiming that they too had affairs with Tiger.