Cameron Eagers his Avatar to be Understood in a Right Way

On the eve of Avatar's release, James Cameron tries to get his ideas over to the audience. 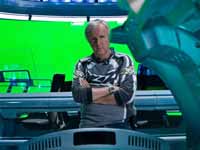 Cameron Eagers his Avatar to be Understood in a Right Way

The Titanic director conceived the 3-D movie 15 years ago and has been in production for more than four-and-a-half years.

Avatar - starring Sam Worthington and Sigourney Weaver - is set in the future on an alien planet which mankind is pillaging for natural resources, and sees the indigenous species harmonise with nature to fight back against the invading humans.

Cameron said: "I see it as a broader metaphor, not so intensely politicised as some would make it, but rather that's how we treat the natural world as well."

"That's not how it works and we're going to find out the hard way if we don't wise up and start seeking a life that's in balance with the natural cycles of life on earth."

But Cameron insists he doesn't see technology as the enemy.

He said: "The film espouses this love-hate relationship with technology. Certainly, we use technology to tell the story, which is a celebration of nature and that is an irony in itself."

Avatar claims to be a ground-breaking technology movie,  the most expensive film ever made.

Cameron revealed he already has plans for a second and third instalment, according to The Press Association.