Eminem is the top-selling artist of the decade, according to Nielsen SoundScan's calculations. 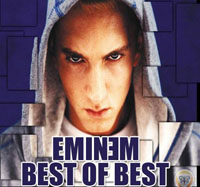 Nielsen SoundScan is an information system created by Mike Fine and Mike Shalett that tracks sales of music and music video products throughout the United States and Canada. Data is collected weekly and made available every Wednesday to subscribers, which include executives from all facets of record companies, publishing firms, music retailers, independent promoters, film and TV, and artist management. SoundScan is the sales source for the Billboard music charts, making it the official source of sales records in the music industry..

Eminem sold more than 32 million albums in the past 10 years; two of his albums, The Marshall Mathers LP, with over 10 million sold, and The Eminem Show at just under 10 million, rank in the top five bestselling records of the ‘00s. It’s not entirely surprising that the top of the charts belongs to Eminem—his only contemporaries in hip-hop, in terms of broad appeal, are Jay-Z, Kanye and maybe Lil Wayne, but his reign is made only more impressive considering his absence from the charts from 2006’s relative disappointment The Re-Up (at only one million sold) to this year’s Relapse. In other words, Eminem was only operating at his peak for two thirds of the decade and still came out on top.

For individual album sales, though, the Fab Four still reign supreme. The Beatles’ 1 was the bestselling album of the decade with 11.5 million copies sold, followed by *NSYNC.

Paste Magazine  has contributed to the report.