Life shows that in real situation Bullock is very close to her strong-willed always winning movie-characters. 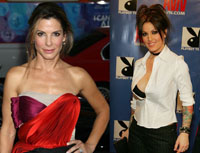 Lindemulder, 39, was denied her request for "expanded visitation rights" in a California court on Monday following her claim that Bullock has prevented her from seeing her daughter.

Bullock, 45, has been helping James, 40, raise Sunny for the past year while the adult film actress was in prison for tax evasion. She served six months in jail and was released in July.

In court papers, James said he was determined not to let his ex-wife gain custody of their daughter because he feared Sunny would be introduced to a dangerous world if she lived with her mother.

Bullock says,  Janine has claimed many times that the actress struggles for the baby-girl because Sandra can't have one of her own, but "that couldn't be farther from the truth."

She asked Orange County Superior Court Commissioner Thomas Schulte to expand her visitation to include overnight stays, but the request was denied. She was, however, reportedly granted one overnight visit with her daughter on Christmas Eve, despite objections from James and Bullock.

Us Magazine has contributed to the report.