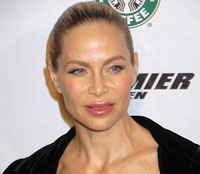 Christina Fulton, mother of Cage's eldest child Weston, 18, is suing the actor for fraud and breach of contract, alleging she's been caught in the web of his financial mismanagement and is now more than $1.2 million in debt herself, Los Angeles court papers show.

Cage stated in an October lawsuit he faces financial ruin after allegedly being duped by a former accountant, Samuel Levin. The actor currently owes $6.3 million in back taxes, recently defaulted on a $2 million loan, and has begun a massive sell-off of homes, cars, yachts and other possessions to recoup his losses.

Fulton, 42, a former actress, says she was provided an L.A. home years ago by Cage in exchange for raising Weston, and believed the property was under her name. That is until September, when Cage allegedly served her with a 60-day notice to get out.

Fulton says that because of Cage and Levin's negligence, she now owes the IRS more than $1 million, in addition to $250,000 in unpaid credit card debt. She says the credit card was supposed to be paid off regularly by Cage and that fraudulent charges were racked up by a staffer hired by the actor who didn't undergo a sufficient background check.

All told, Fulton says damages to her exceed $13 million.

Levin, the accountant, has countersued Cage, stating the actor's financial collapse was due to his "compulsive, self-destructive spending."

Cage's attorney Marty Singer tells reporters: "This lawsuit is ridiculous and absurd. Nicolas Cage has given her approximately three million every year for many years, even though he was only obligated to pay her six thousand a month in child support. We expect this lawsuit to be promptly thrown out."