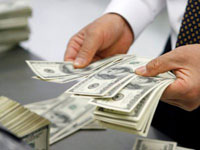 His losses were so bad they represent more than five per cent of the total revenue made by two casinos he visited, Caesars Palace and the Rio.

Watanabe's colossal losses soon became the stuff of legend - not to mention a tourist attraction.

'It got to the point where people would go just to watch,' said one Vegas regular.

'There are a lot of things that make you cringe in Vegas - but I've never seen anything like that,' Daily Mail informs.

Today, Watanabe and Harrah's are fighting over another issue: whether the casino company bears some of the responsibility for his losses.

In a civil suit filed in Clark County District Court last month, Watanabe, 52, says casino staff routinely plied him with liquor and pain medication as part of a systematic plan to keep him gambling.

Nevada's Gaming Control Board has opened a separate investigation into whether Harrah's violated gambling regulations, based on allegations made by Watanabe.

In April, the Clark County District Attorney's office charged Watanabe with four felony counts in district court for intent to defraud and steal from Harrah's, stemming from $14.7 million that the casino says it extended to him as credit, and that he lost.

Although Watanabe has paid nearly $112 million to Harrah's, he has refused to pay the rest. He denies the charges, alleging that the casino reneged on promises to give him cash back on some losses, and encouraged him to gamble while intoxicated. If convicted, Watanabe faces up to 28 years in prison, FOX News informs.