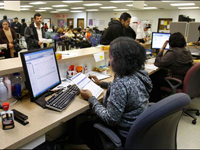 With the U.S. unemployment rate topping 10 %, FamiliesUSA is urging Congress to extend a measure that helps laid-off workers maintain employer-sponsored health coverage with a 65 % subsidy on their insurance premiums.

A report released by the group on Tuesday said without the subsidy, insurance premiums would consume a significant portion of monthly unemployment benefits and in nine states exceed the average jobless benefit.

The subsidies began in March as part of the $787 billion economic stimulus and the nine months of benefits for the first group of recipients expired on Monday. The program runs through December and anyone laid-off before the end of the month remains eligible for nine months of subsidies.

Some Democrats are considering extending the program as part of new legislation they hope to pass before the end of the year to address unemployment. The issue will also likely be discussed at the White House's jobs summit on Thursday.

If Congress fails to act, anyone losing a job in January subsequently would receive no federal subsidies to maintain employer-sponsored health coverage through what has become known as the COBRA program.

Under that long-standing law, workers who lose their jobs can keep their employer-sponsored health plans for up to 18 months although they must pay the full premium. For many laid-off workers, the $1,111 average family monthly health insurance premium is too much.

"When workers lose their jobs, they often lose their health coverage as well," said director Ron Pollack. "For millions of laid-off workers and their families, the federal COBRA subsidies have been a health-coverage lifeline."

The report said that average monthly family COBRA premiums vary range from $979 in Idaho and $989 in Iowa to $1,246 in Massachusetts and $1,232 in Minnesota.