The statue of Liberty's city is to take decision on lawful alliance of gay lovers. New York's Senate will take a long-awaited vote on a bill to legalize gay marriage. 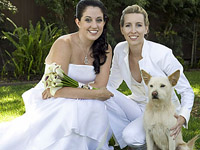 But the outcome of the vote Wednesday that could give final legislative approval to the measure remains in doubt.

The bill will need 32 votes to pass. And Democratic Sen. Liz Krueger, a leader in the majority, says the measure will need Republican votes because of opposition from some of the chamber's 32 Democrats.