The Catholic League has condemned Joanna Krupa's racy ads for PETA in which she lobbies against pet stores and animal breeding. 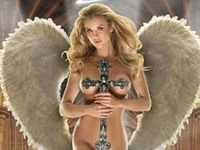 In the "Be An Angel for Animals" campaign, the Playboy model and Dancing with the Stars alum appears as a nude, winged angel: in one, she holds a strategically placed crucifix; in another, she holds her dog and a rosary.

The Catholic League, calling PETA "animal killers" and "a fraud," says that the organization "exploits Christian symbols" with the new Krupa billboards.

Krupa fired back in a statement Tuesday: "It's understandable that the Catholic League is wary of another sex scandal, but the sex we're talking about pertains to dogs and cats."

She continues: "As a practicing Catholic, I am shocked that the Catholic League is speaking out against my PETA ads, which I am very proud of. I'm doing what the Catholic Church should be doing, working to stop senseless suffering of animals, the most defenseless of god's creation."

People for the Ethical Treatment of Animals (PETA) is an animal rights organization based in Norfolk, Virginia, USA. With two million members and supporters worldwide, it claims the status of the largest animal rights group in the world.

Us Magazine has contributed to the report.