The actors of "Harry Potter" share about their desires and plans for future. 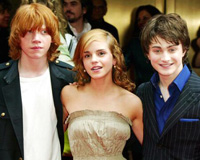 Daniel Radcliffe regards family of his own as not a very far prospective.

"I've I'm not planning on it soon — that's one of the things I'm really looking forward to doing,"the 20-year-old "Harry Potter" star said in an interview.

Radcliffe, who is currently in England filming the final two installments of the "Harry Potter" series, said he's been influenced by children on the set.

"What's been cool is that I've been here when a lot of people here have had kids while on the film, and I've seen the change it's made in their life and how amazing it is," he said.

Radcliffe's co-star Rupert Grint, who plays Harry's best friend, Ron, in the films, says the thought of his Hogwarts days coming to a close is both intimidating and exciting.

"It is quite scary when this all ends because we're stepping out into the real world. It is quite a bubble, I suppose — we've had these films to do every year, and it's become quite a routine," Grint said, adding, "I am quite keen to move on and see what else is out there."

Emma Watson, who plays Hermione Granger in the film, already has said she'll take a step back from acting after "Harry Potter." The actress is currently enrolled at Brown University in Providence, R.I., where she is studying literature.

NY Daily News has contributed to the report.