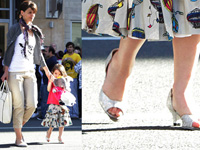 Katie Holmes is a happy mother of a beautiful child. The Cruise's wife never minds Suri's choice, but she often has to comment it for reporters.

Few newspapers took a photo of Suri, wearing high-heeled shoes. But when reporters criticized the mother for letting  the 3-year-old girl to wear high heels during her almost daily paparazzi walks, Katie put a bold face on it.

"She—like every little girl—she loves my high heels," Katie explained to Access Hollywood. Suri wanted her own pair, and what Suri wants, Suri gets.

"I found them for her and she loves them," Katie says, adding that they're supportive for Suri's young feet. "They are actually ballroom dancing shoes for kids."

E!Online  has contributed to the report.